After Bulfinch’s Mythology and Mythology by Edith Hamilton, there have been four stand out books while researching my novel about Teiresias. 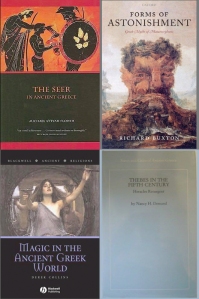 Perhaps more importantly, I have so far interviewed about a dozen good folk who have different experiences than my own regarding philosophy, religion, life and living.

For purposes of the story, I have been assuming Teiresias would have lived about 2750 to 3000 years ago. I decided that he was born two generations after Deucalion’s Deluge. Though it’s largely the same story, the date doesn’t quite match what James Ussher calculated as the time of Noah’s Flood – 4359 years ago.

Mythological stories still resonate with us for at least two reasons:

It probably won’t be long before there’s a trend analysis app that helps us anticipate aspects of the future. I predict it won’t be called Teiresias.