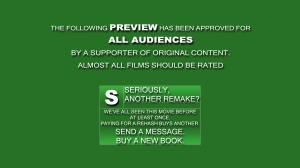 Whether called reboot, reimagining, or remake – there is, at least, one almost guaranteed reaction when Hollywood makes the announcement: There is nearly always complaint by loyal fans of the quintessential (older) version.
And when the film is released, it never plays to a completely empty theater.
Nearly 125 remakes were released between 2003 to 2012. That would be one a month, on average. Said remakes brought in a combined box office gross of $12 billion.
The explanation for the remake frenzy is “the foreign market”. I’m not sure I buy that. Surely folks in The People’s Republic of China (中华人民共和国) get just as bored by/tired of an endless chain or rehash as anyone else.
I think… I hope — that the people of the Republic of Nauru (Naoero) are desirous of new and original ideas and content.
Hollywood’s emphasis on the reliably bankable is a polite way of saying they are risk-averse. Similarly, when they want it accessible, that means they don’t want to challenge or offend.
But personally, I enjoy having my assumptions challenged and my knowledge expanded. A film can be both confusing (at first) and offensive (if for effect) – so long as the end result is teaching a valuable, needed lesson. And, yes, I do expect a message from entertainment. If there isn’t to be a message – fireworks displays are free and generally ubiquitous during blockbuster season.
Nearly all work by the motion picture industry is based on brand & franchise now. There were times – and not so very long ago – when filmmakers were just as interested in story and moral as I still am.
The above Hollywood preferences may have contributed to the opinion – voiced by many – that Hollywood is out of ideas. That’s absurd. There are new novels being published every month.
The solution is clear! Reward storytellers.
Don’t go a see a film unless the trailer, pre-release press, and/or critical reviews illustrate that said film presents a new idea.
Buy a book instead.
You probably know an author. You may be one. We craft stories that we feel make important observations about life and may offer the equivalent of life-hacks within our work. Sometimes telling these stories means a sacrifice or two in the life of the author. There are tales behind the tales a reader may never know. When you hold a new book, and before you start reading, try to imagine the heroic journey the author (along with her or his allies) have already been on to see it safely into your hands.
The novel is a kind of gift-with-purchase. What you pay for is that unknown adventure the author has been through to tell you something potentially important.
If enough people do this – buying a book Instead of seeing a movie – some studio is bound to option a story you’ve read. We won’t have wasted money on a disappointing two hour retread. We also actually own a book as an added bonus.
Everybody wins! You, the book store, the publisher, the editor, and the author all get to smile. The film executives will wonder why – until the buy and read it too.
Coming soon…
—
Advertisement