An annoyingly catchy tune from 1992, Dizz Knee Land by Dada, has been on my mind for the past few days – but with “Dragon Con” substituted for “Disneyland”.

Note: I apologize if that song is now playing on repeat in your head.

This will be my second year attending Dragon Con. I will be posting a schedule of the panels on which I’ll be presenting as the date grows a bit closer.

This event is, as you might suppose, always very exciting. It has been a busy year for me since my first time there. I’m in progress on two novels, which readers of this blog are aware. Together with my coauthor and business partner, Leanna Renee Hieber, we have introduced the adorable “feels assistants” – a.k.a. Pandora’s Pets to more than 100 customers and a growing number of stores. I was quite honored to develop the four separate covers for Ms. Hieber’s upcoming release of the Dark Next Chronicles.

We have both written separately for an illustrated anthology of Lovecraftsmanship that’s expected to launch in October – probably just in time for Halloween. Along with the other two members of PsychWing (i.e., The Nerdy Duo) we are developing a short science fiction film.

It has been a year (plus) of dreams coming true.

Note: Until after Dragon Con there may be a slight disruption in my once-a-week posting to Surfing the Zeitgeist.

It is probably reasonable to assume that the faith of our parents, if any, is assumed in our early years to be the only faith. I remember noticing and asking about the different iconologia and emblemata of the 14 houses of worship in my very small hometown. It was a disproportionately large number of options. For reasons that are beyond the scope of this post, I was a member of at least five different congregations belonging to different Christian denominations before the age of 12.

And prior to that age, the United States was ramping up to its Bicentennial celebrations and participating in the first two Olympics of which I was aware (some years before the Winter and Summer Games were split and staggered). On display at home was a vast array of old and newly minted patriotic symbols. Each nation of the more than 90 competing The Games (half the world at the time) had brought an entirely different selection of icons to the stadium.

Surely formal education contributed to an awareness of how much larger the world is than I might have imagined before adolescence. But the diversity of religious and national expression was given sharp emphasis by experience and observation. This has allowed me to acknowledge that dignity can arise everywhere on the planet – from each person who will allow it to manifest – regardless of place of birth.

There is a vogue in political thought here, the notion of American exceptionalism. The nation may unfortunately have been born with it. The soil here is not a magical home plate (to employ the metaphor from our “national pastime”). It isn’t where a person is born or lives that makes their accomplishments special. Accomplishment and the person who achieves it are both special – anywhere. I’m not running for office. I don’t have to perpetuate a myth.

As readers of this blog may have guessed, flags and maps fascinate me. A flag is not just the equivalent of a postal code. It is a declaration of a certain set of beliefs and, it must be said, opinions. A map is more than a tool for where to find things. For me, maps have long and collectively been metaphors for the intrinsic potential of what things may be found. 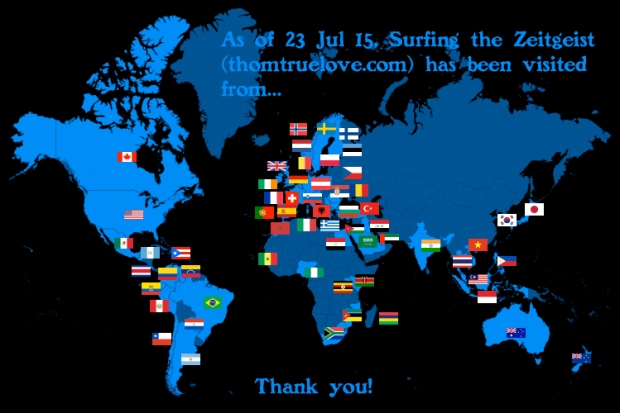 Surfing the Zeitgeist is intended to share my perspective on the value and mission of creative expression – along with a certain view on the universality of potential. The above map shows the nations from which Visits have been made. I track this as a reminder that there isn’t just one zeitgeist to surf. Each visit is more than a “pin in a map” for me. It’s a vantage point – a reminder that my point of view is only one way of examining the zeitgeist. I’m curious about them all – and I think I always have been.