Back to the fabled past — in ancient Greece with Teiresias

In watching a documentary series (The Ascent of Women, written and presented by Dr. Amanda Foreman) about the devolution of the role and treatment of women (from the establishment of the Code of Hammurabi between 1792 ʙᴄ and 1750 ʙᴄ on), I’ve had cause to revisit my ideas for a novel about which I’ve posted here and will eventually return to the front burners. As readers of this blog may recall, the saga of Teiresias (working title: A Song Heard in the Future) is intended as my restoration of that mythological figure’s story as a central character rather than, in essence, the chief of the Chorus in the accounts of others.

Apart from his oracular talents the famous seer is also remembered for the chapter in which he is transformed into a woman. Before work on Song was tabled in favor of my science fiction/thriller Astral, I had managed to reconcile some of the conflicting aspects of Teiresias’ fragmented chronicle but I hadn’t managed to do the same for the tragic treatment of women in ancient Greece with what I believe the zeitgeist views as heroic efforts to correct that state.

The documentary established the serpent as a symbol of the power of men and their obsession with honor. 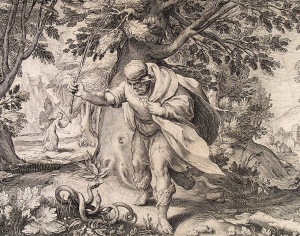 Therefore, one explanation of the change of the identity of Teiresias is the result of his having killed the male of a pair of snakes. In Greek mythology (then religion) women were seen as a much greater contrast to men than they are perceived today; they were regarded as a separate and inferior species and category of property. Women then had to be controlled and concealed from public life. Some of this ironic travesty in the cradle of democracy persists today.

The diviner was being punished when he was made female and, although the exact transgression against honor has been lost, he must have been meant as a cautionary tale – presumably for boys on the cusp of establishing their adult status. In brief, being a man meant in part avoiding demonstrating any feminine quality. The result was strictures on the behavior of both genders with the injustice of a much more strict code imposed on women. 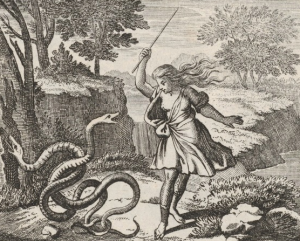 The metaphor in the myth indicates that Teiresias was able to regain his masculinity by finding another pair of snakes and then killing the female. In the story I intend Song to be it will not be a failure in maintaining honor that first changes Teiresias. Given that there would be not need for an act of absolution.

When it is restarted Song will illustrate a quite different account of the acts and fate of the counselor to kings of the city-states with more validity for today’s culture. Rather than a demonstrating Teiresias’ time spent as a woman as a punishment, I may choose presenting it as an opportunity to defy convention. Something like that should help make him – and her – as more heroic. The restoration of honor will be, in my small way, an unworthy aspect of legend and history.

The snake metaphor will still be present but with a vastly altered metaphor and meaning. The former view of caution is inappropriate to a modern version – still simmering on the back burner.