It took a while…

This chart shows the lineage of most of the characters involved with the major plotlines of A Song Heard in the Future – as a single, rather extended family. Scholars of the Greek myth might be able to detect a few contradictions between this and attempts by other. For example, according to some, Hecate was a virgin goddess. Aeëtes could not have been her husband – and father with her of Circe.

Parentage is just one source of discrepancy. There may be two characters named Chariclo – one marrying Chiron (with Carystus and Melanippe as children) and the other Everes (giving the world Teiresias). I’ve decided that Chariclo is just one person – nymphe – having had two marriages. More than a few myths will show a character as the son or daughter of another, while a related telling indicates the name of the son or daughter is actually the spouse. Is Antiope the daughter of Asopus and Metope or of Nycteus and Polyxo?

Then there’s the omission of a spouse, usually the wife. While there are myths that state Teiresias had at least three daughters. There are no accounts of the other parent(s). I’ve made my own selections here.

The last of the puzzles posed by mythology is there is no evidence in any myth that Historis (the presumed eldest daughter of Teiresias) married and had children. Her wedding to Poeas, the Argonaut archer, is another choice of art. 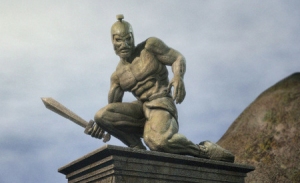 Talos, from Jason and the Argonauts (1963, Columbia Pictures)*

* Ownership of the image of Talos is neither claimed nor implied. In mythology, the automaton was created Hephaestus. In the film, by Ray Harryhausen.

Two red stars indicate the divine partners of Alcyone and Antiope. A simple search will find the names I’ve not shown. From the perspective of these two women, it may not be completely wise to disclose the presumed Pops.

A few characters’ names appear more than once on the chart: Chronus, Everes, Chariclo, Melanippe, and Teiresias/Teireseia. The first four are immortals and, therefore, capable of being sexually active in many different generations – sometimes century or longer apart. With the last, the seer undergoes a famous transformation and becomes part of two different families.

It may not be possible to build a family tree of Greek mythological characters without what some would consider errors. The stories involved are part of an anthology written by Greeks and Romans over almost a millennium. The authors didn’t always compare notes. A very respectable effort was made in A Genealogical Chart of Greek Mythology (2003, University of North Carolina Press). Two factors prevented me from using it for Song: 1) It contradicts some of the connections I required and/or omits some of the characters I needed to use and, 2) the price is pretty high.

Was this trip really necessary? Given the need to keep track of more than 85 named characters (not to mention those not appearing on this chart), each of whom has at least some established history (according to Plato, Ovid, Pausanias, et al.); I think it vital.

Of course, I’ve no way of knowing if the book, when published, will include this chart or one like it. The reader may not benefit from it as much as I or the story itself have/will. Included or not, it will help me make things clear.

Note: The Olympioi and Titanes are, of course, the Olympian deities and the Titans, respectively. The Nomioi were the denizens of the non-human wilderness, including lesser divinities. It would have broadly included the centaurs (kentauroi), satyrs (satyroi), nymphs (nymphai), and river gods (potamoi). Mortoi means “mortals”.