So, I learned a new word yesterday: kathenotheism.

It describes belief in a sequence deities and a succession of supremacy. Veneration of a series of deities, each in turn, might be painted as the theological equivalent of respect for the office of the presidency rather than of any given office holder. Both the term and concept are new to me and I’m fascinated.

Given my long-standing curiosity about non-Christian faiths and Greek mythology in particular, it seems odd that this did not cross my radar much sooner. Kathenotheism should have come up during an examination of the Smarta Tradition of Hinduism if not of Orphism.

In Astral, the novel-in-progress, there is a faction that might have developed a faith separate and distinct from other groups in their society. Now I will probably have this one-by-one Supreme Being notion be part of their religion.

My introduction to kathenotheism came during research into what’s called “conreligion” by some. This is the practice, related to conworlding, of constructing a fictional religion – usually for a roleplaying game setting or work of fiction. Apart from the gods themselves, ritual practices, and creation myths another aspect of this effort can be making a determination as to whether society is regressive, progressive, or cyclical.

In more than a few religions the Earth was created perfect and has been losing ground ever since. This was part of the Aztec view and is found in some movements within Hinduism. In both the current Age is held to be the worst of four or five. In Vedic belief the next Age with be newly Golden. Hesiod, in his “Works and Days”, wrote of something similar but says little to nothing about starting again.

In politics there is a theory some espouse that our nation was at its best at some time in the past. The phrase “Greatest Generation” can be seen as the equivalent of a high-water mark. The myth of the Golden Age is the primary underpinning of cries of “taking the country back”. Though common today it is hardly a new perspective.

I’m more optimistic; I learned at least some of my humanism and idealism from Gene Roddenberry, after all. I am a bit skeptical about whether we’ll achieve the kind of utopia he imagined but I do agree with Martin Luther King, Jr.: “The arc of the moral universe is long, but it bends towards justice.”

In his response to the Montgomery bus boycott, Dr. King was making a reference to Theodore Parker from almost a century earlier: “I do not pretend to understand the moral universe; the arc is a long one, my eye reaches but little ways; I cannot calculate the curve and complete the figure by the experience of sight; I can divine it by conscience. And from what I see I am sure it bends towards justice.”

If the path of history is not progressive we can still want it to be. Write and work to help guide it in that direction. Any and every virtue can be used in place of “justice” in the quotes above. If entropy is a strong factor in societal development we have to wonder why any civilization achieves any greatness at all – let along begins in the first place.

Historically and globally, we humans have been worried about ‘how it will all end’. Changing that to a concern with an endpoint would, I think, be preferable. We’re also a species rather obsessed with our own free will and intellect. Ages come and go, kath’ héna (καθ’ ἕνα). Going with the flow while circling a metaphorical drain belies those aspects of which we are so proud.

For that faction in Astral I may be trying to combine both progressive and regressive trends with a cyclical pattern. I’ve taken a line like the one traced in a seismogram or encephalogram (etc.) and twisted it along a spiral. 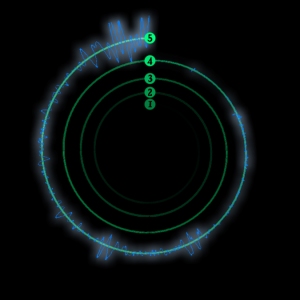 If there is any truth to the cyclical nature of Ages and if effort to build and maintain virtue (including justice), peace, and harmony can make this Age better than we find it – maybe the next Age can be even better. I don’t think it matters if we ever have proof.

On or about Sept. 28, 1991, Dr. Carl Sagan and Tenzin Gyatso (བསྟན་འཛིན་རྒྱ་མཚོ།) met. I am neither a scientist nor a theologian but both of these men have my respect. The former is most broadly known for Cosmos: A Personal Voyage and the latter as the 14ᵗʰ Dalai Lama. The approaches to the subject of understanding the universe they each took are different but the mission are one and the same. The meeting was recorded, at least in part, and while the video quality is poor but the message is strong and can be found here.

Whether we have any formal training in the fields of science, religion, or philosophy or not, all of us share the goal of comprehension. What is the cosmos and why do we find ourselves in it? There are pragmatic, non-philosophical answers to pursuit of this knowledge.

In one of the final interviews of Dr. Sagan, he was asked to comment on the consequences of science and technology on human civilization. In part, this was his answer:

“And if we don’t understand it, and by ‘we’ I mean the general public, if it’s something that – ‘Oh. I’m not good at that. I don’t know anything about it.’ – then who’s making all of the decisions about science and technology that are going to determine what kind of future our children live in?”

Two years before his death, Dr. Sagan gave a lecture at Cornell University and included a philosophical reflection on an already well-known photograph taken of Earth by the Voyager 1 space probe. This is often called The Pale Blue Dot speech. It is truly worth a listen. Essential.

Just a phrase or two might offend some but, if so, it might be among those who have decided they can learn nothing from science or scientists. Nevertheless, the message and emotional tone of Dr. Sagan’s plea should be universally held – regardless of any other ideology at least in the opinion of this author. In very few words, relatively speaking, this stands as a summary of what being human means and could mean. From the moment I first heard them they also stood as something of a miracle.

To paraphrase a definition of miracles I once read, they’d be inexplicable events that inspire us to do more/better. Put this way – science, religion, and the individual quest for meaning with which we’re all involved might all include a miraculous experience along the way. With this two-part formula for a miracle each of us is able to define and find our own.

As far as is known, the Dalai Lama hasn’t commented directly on this almost poetic prompt for humanity to acquire an improved perspective. However, the following opinion from him seems ample cause to presume the two scholars would be in agreement.

“Whether one is rich or poor, educated or illiterate, religious or nonbelieving, man or woman, black, white, or brown, we are all the same. Physically, emotionally, and mentally, we are all equal. We all share basic needs for food, shelter, safety, and love. We all aspire to happiness and we all shun suffering. Each of us has hopes, worries, fears, and dreams. Each of us wants the best for our family and loved ones. We all experience pain when we suffer loss and joy when we achieve what we seek. On this fundamental level, religion, ethnicity, culture, and language make no difference.”

As a miracle results – by this definition – from an inexplicable source, it is the effect on our motivation that matters more and whether and how we allow ourselves to be moved and motivated. I don’t see any conflict between religion (“Be kind whenever possible. It is always possible.”) and science (“Somewhere, something incredible is waiting to be known.”). I don’t see any reason why they can’t both have their share in the miraculous. It’s a big universe.