We are – for lack of a better word – programmed to look for meaning. Our education works to enhance this natural tendency. It may be why some have an affinity for sacred geometry. Certainly Johannes Kepler attempted to demonstrate that meaning was a built-in feature the solar system (Mysterium Cosmographicum, 1596). 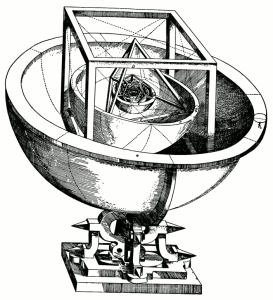 The phenomenon of one or two orbits helping to predict the next may not be by design but gravity does create some poems in the cosmos. Resonances – such as that between Jupiter’s moons of Io, Ganymede and Europa – are my favorite example. For each of Io’s orbits, Europa makes two and Ganymede makes four.

But science is not the only field of study.

Imagine there were some mental equivalent of gravity and celestial bodies. Suppose that this explains why certain ideas – presumed forgotten – return to us from time to time. Or that it is precisely why certain locations are thought to be frequented by ghosts. Wouldn’t that be cool?

For quite a long while I have enjoyed this poetry and I can see why it has an appeal, particularly in astrology. It would be very nice to know why the wheels seem to fall off the wagon when Mercury is in retrograde (which it isn’t) or why it’s a good idea to be more mindful when Uranus is in retrograde (and it is). And though these changes are not caused by planetary action, the poetry serves as a reminder that they do, however, happen.

Notwithstanding ☿ and ⛢, et al. – or haunting thoughts or spirits – the cosmos is a very big and usually unpredictable place. Maybe it’s unfair to consider astrology a pseudoscience.

Certain aspects are really just a To Do List.