During the history of cinematography, at least since the end of the Victorian era, at least one film adaption of a play by Shakespeare has been made every year but nine*. The enduring allure of the playwright’s work is not the tales themselves nor particularly the quality with which they’re perceived. In his own day, critics viewed him as ambitious beyond his talent. Today, apart from the Greek dramatists – most particularly Aeschylus, Sophocles, and Euripides – it’s difficult to name a rival if measured by the duration of popularity.

When number of portrayals by an actor is considered (again in motion pictures and television), the most famous creations of Sir Arthur Conan Doyle and Bram Stoker get more attention than Beatrice or Viola. In terms of time, Shakespeare’s work would have to fade completely then Dracula† and Holmes‡ would both still need almost three centuries to catch up.

In ancient Greece the focus on the stage was morality, usually through the exaggeration of undesirable traits. The Bard’s emphasis was less on the literal influence of mythological beasts and beings than on the metaphoric demons that drive our passions and lives.

The Great Detective and the Vampire Count are both power fantasies albeit in profoundly different ways. Taken as a whole, this very brief survey of noteworthy drama all concern the human road between some day and last day. That’s why they last as opposed to nostalgic efforts like Happy Days or That ’70s Show and dated entertainment not old enough for nostalgia to set in.

What we read and watch as a society is a little different from the same during an individual’s experience with fiction; it’s less about the human condition, more the condition of humanity. It’s impossible to predict whether Doctor Who will continue regenerating from actor to actor for the next 500 years. However, the scope of human history distills to the substance of just ten (or twenty) activities of people in groups.

We’ve been obsessed as a species with the following: ➀ Defense and Security, ➁ Information and Communication, ➂ Resources and Industry, ➃ Education and Labor, ➄ Culture and Weal (or Well-being), ➅ Transportation and Commerce, ➆ Planning and Governance, ➇ Law and Justice, ➈ Utilities and Services, ➉ Science and Technology. 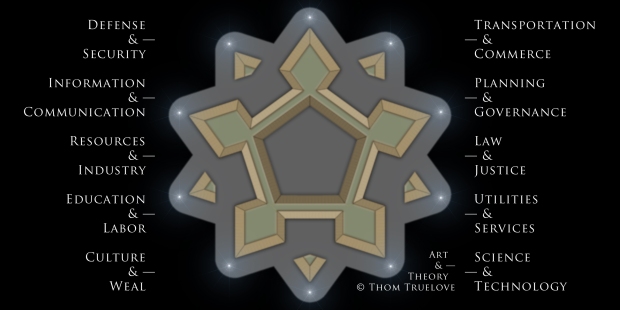 Any aspect of plot, notwithstanding a given hero’s specific journey, will fall into at least one category pair. The same is true of society in real life; these are all of the parts of civilization. What changes over time is the degree of sophistication in each. Without any prediction of whether Astral will survive for centuries, the story mainly involves 5, 8, and 10 (with the last being due to sci fi as the genre chosen).

It’s very easy to imagine that humans 500 years from now will still have forms of entertainment and that they’ll feature fictional humans. I’m having trouble picturing a future society that wouldn’t be described in terms of its approach to my [“DIRECT-PLUS”, © Thom Truelove] theory as stated.

† Dracula has been portrayed in more than 270 films.

‡ Sherlock Holmes is short about 20 for close second.