There are probably no authors setting out to have a star or planet named in their honor. That said, very few would decline such homage. Asteroid 4659 and a crater on Mars bear the name Roddenberry. The creator of Star Trek likely didn’t include earning this sort of acknowledgement while developing the series.

Gene Roddenberry did, however, attempt to get the science right. He consulted scientists and engineers on a somewhat regular basis. He was also a student of his times and wanted to present entertaining adventures about the future blended with relevant social commentary. Nichelle Nichols, the original Uhura, famously tells a story that each episode was meant to be a modern morality play.

Countless people recount that original Trek inspired their choice of careers while not necessarily having achieving Roddenberry’s dream of humanity at peace with itself and unafraid of its future in mind. This phenomenon is not limited to math and technology either; I know of at least one lawyer who found the trial of Spock in the episode “Menagerie” fascinating enough to prompt study of jurisprudence. The humanism and idealism of Star Trek are very important facets of my long-standing desire to write and make art. 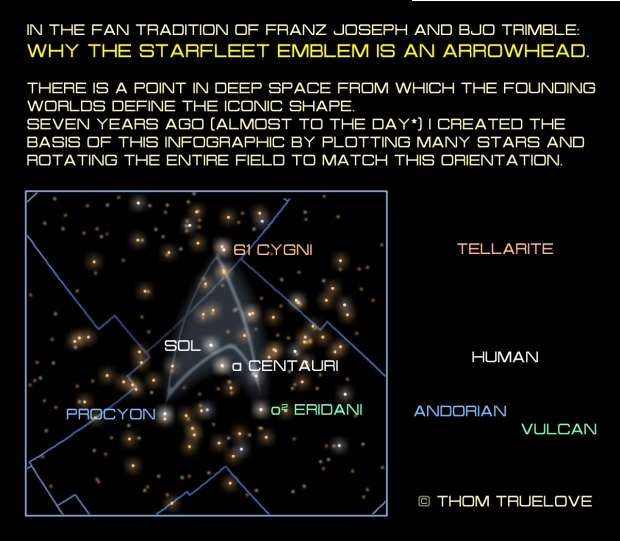 Many fans consider the reboot of the franchise to be less than worthy of the title and have branded it – somewhat pejoratively – as the “Abramsverse” or “NuTrek”. Paramount and CBS have recently attempted to get ahead of these descriptions. They’d like us to call it “The Kelvin Timeline”.

Chris Pine is the second actor to portray Captain Kirk. He has been quoted as giving the following response regarding the franchise shifting away from speculative futurism in favor of presenting an action thriller.

“You can’t make a cerebral Star Trek in 2016. It just wouldn’t work in today’s marketplace. You can hide things in there – Star Trek Into Darkness has crazy, really demanding questions and themes, but you have to hide it under the guise of wham-bam explosions and planets blowing up. It’s very, very tricky. The question that our movie poses in ‘Does the Federation mean anything? And in a world where everybody’s trying to kill one another all of the time, that’s an important thing. Is working together important? Should we all go our separate ways? Does being united against something mean anything?”

Star Trek was fond of Shakespeare references and there’s one that perfectly sums up the problem with the Abramsverse and the attitude expressed by Mr. Pine: “…it is a tale told by an idiot, full of sound and fury, signifying nothing.”

The last log entry by Kirk was wonderful fan service at the end of The Undiscovered Country and should now be interpreted by CBS and Paramount as exactly how fans would like to see Star Trek handled – rather than catering to a formula while implicitly demeaning the audience.

“This is the final cruise of the Starship Enterprise under my command. This ship and her history will shortly become the care of a new generation. To them and their posterity will we commit our future. They will continue the voyages we have begun and journey to all the undiscovered countries, boldly going where no man… where no one has gone before.”

As part of a recent presentation by Claire Legrand, Megan McCafferty, and Leanna Renee Hieber all three authors recommended that any authors in the audience write what they loved reading as children. Write what they wanted to read.

In broad strokes I plan to cover some of the same ground as Star Trek did: the destiny of humanity in space and to what extent human nature might be baggage carried along the way. It seems fair to say that a writer must be the first fan of his or her own work. So I’ve charted my world(s)-building – applying a different rotation to the same field of real stars used for the Arrowhead interpretation. Astral’s interstellar factions overlapped each other in a previously posted map. That’s not the case in this new one.

At a convention I once attended both Gene and Majel Barrett Roddenberry recommended that whatever I might wish to see in Star Trek I should write and tell Paramount. I never did follow their advice but I may hide it under the guise of thoughtful speculation and all the things the Federation still means to me.